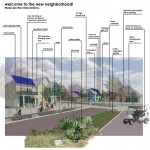 “We are keep­ing the baby and we are using the bath­wa­ter to water our garden.”

A published online article about me and some friends getting a notable finish in the 2009 Next Generation Metropolis Magazine Design Competition. Mark Tirpak, who is not mentioned in the article, also helped–he is an urban planner.  Sam Schonzeit did most of the architecture work that I helped do rendering, and John Hart Asher did the landscape design. Every Thursday for the next few months, we’re posting excerpts from notable 2009 Next Generation proposals that didn’t quite make the final selection featured in the May Issue of the magazine. This week: Subverting Suburbia, by Sam Schonzeit, John Hart Asher, and J. Parker Williams

Schonzeit, Asher, [Tirpak] and Williams envision a holistic approach to decreasing Americans’ resource consumption through smarter, community-oriented subdivisions. Here are some key excerpts from their proposal:

What is the title of your proposal?
Subverting Suburbia: A holistic approach to decreasing our consumption of gasoline, water, and electricity while fostering community, health, beauty, and a burgeoning economy

How would you describe it?
We are rehabilitating subdivisions where infrastructure, landscape, buildings, and people already exist in a form that makes energy addiction inevitable. Through rezoning, re-envisioning the planted landscape, and minimal architectural interventions we are functionalizing the subdivision to respond to global environmental, health, and economic crises and the human desire for community.

How does it pertain to energy?
Rezoning to provide services within the subdivision decreases the need for gasoline. Architectural interventions make homes more efficient, decreasing the need for electricity which is being created locally. The need for irrigation, a significant drain on power and a diminishing water supply, is reduced through an alternative approach to landscaping.

What makes it important?
We are looking at something that is rarely looked at with any seriousness because it is so ugly and it is so rife. It is a totally unglamorous project and it is nothing new in several ways. The first is that we are not proposing a new product. We are not proposing a new mold to be made or a new type of development to be built. We are looking at the problem of energy consumption, people’s isolation within their community, dependence on foreign oil and seeing that we can make a significant contribution with minimal interventions. We are looking at a solution that does not require the razing of an existing paradigm and its physical manifestation; rather, we are proposing a gentle and holistic cure. We are keeping the baby and we are using the bathwater to water our garden.

Our proposal is also nothing new in the sense that we are proposing a return to a model of living that existed in this country until WWII. We are proposing that people use the land to grow food that will feed their community, reduce the need for fuel to bring produce to market, create a healthier diet, and provide exercise. We are proposing that the decorative plants in the community should not impinge on the already stressed water supply and will not require the additional energy needed to pump water. Our ideas are not new. They are typical of New Urbanism and our interventions should appear familiar. It is where and when we are proposing these ideas and the scalar ramifications that are original. And it is important now because these houses were built with an old economy in mind, one in which people had money to heat and cool them buy gas to get to and from them. Now those houses and the land they are on or were supposed to be on need to be repurposed.

What is your business plan for realizing your proposal?
Politicians have lately bandied about figures approaching a trilllion dollars in aid packages. Obama has spoken of a green economy and creating 4 million jobs. This era has lately been compared to the Great Depression and the creation of jobs may be similar to the WPA. We conceive of our project on a similar scale. We think it is similarly important but significantly cheaper. It can be done incrementally, shutter by shutter, house by house, subdivision by subdivision. We are creating a monumental fix and not a monument. The monuments have been built. We are mending the cracks.

This is a project funded by the government and given the recent rhetoric we don’t think that that is an outlandish assumption. Despite this assumption, realize we still need to garner the attention of a larger public. Our first step would be to choose a subdivision and get a community interested. We would throw a party to sell the concept and to demonstrate what it could be like, how much money would be saved, the positive lifestyle changes a program like ours would foster. There would be temporary displays and experts, food, and a band. We would invite people to the party through traditional means and also by setting up intentional communities on the Internet. We would continue to host events periodically in which relevant parties would demonstrate different ways to realize a more functionalized subdivision. These events would be videotaped and posted online. We would set up partnerships with volunteer organizations that might be willing to help low-income clients install interventions that would lower their utility bills. We could possibly establish a tool lending library that people could use to garden or install some of the interventions themselves.

If we were able to generate enough interest and funding with these activities we would create a need-based (or need-blind?) contest or raffle where the winner’s home would become a demonstration home for the community. Our zoning goals would piggyback on the interventions of the smaller scale. By showing that our architectural rehabilitations can decrease energy use on a small scale, we believe we would be in a better position to lobby for zoning changes that would act merely as an extension of an already proven approach.